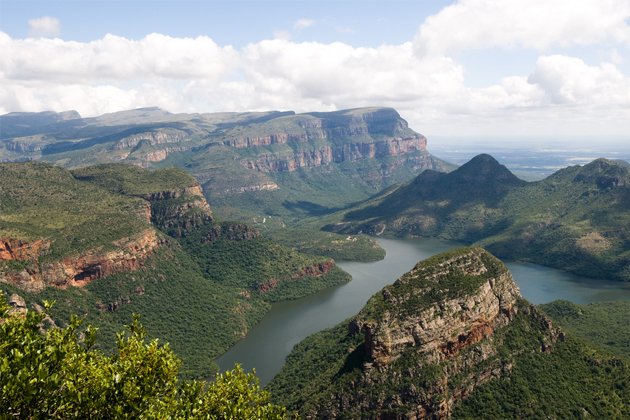 The Blyde River Canyon Reserve extends along the Blyde River Canyon’s winding path, which at every turn offers more and more impressive views over sheer edges dropping 800m into the riverbed.
The fresh mountain scenery and panoramic views over the Klein Drakensberg escarpment are quite spectacular and give the area its name of ‘Panorama Route’. Viewpoints are named for the spectacle they offer, and God’s Window and Wonder View hint at the magnitude of the scenery.

The ‘Pinnacle’ is a single quartzite column rising out of the deep wooded canyon and the ‘Three Rondavels’ (also called ‘Three Sisters’) are three huge spirals of dolomite rock rising out of the far wall of the Blyde River canyon. Their domed heads are iced in green and their sides are stained with fiery orange lichen. From the ‘Three Rondavels’ you can see the extensive Swadini Dam in the far distance, which marks the end of the reserve. At the meeting point of the Blyde River (river of joy) and the Treur River (river of sorrow) water erosion has created one of the most phenomenal geological phenomenon in South Africa. The ‘Bourke’s Luck Potholes’ have taken thousands of years to form strange cylindrical sculptures carved by swirling water. The smooth red and yellow rocks contrast with the dark pools.

All five of South Africa’s primates can be see in the The Blyde River Canyon Nature Reserve. The somango monkey, nocturnal greater and lesser bushbabies, chacma baboons and vervet monkeys are all present.   Hippopotamus and crocodile live in and around the rivers and wetlands of Swadini Dam, as do waterbirds and otters. Almost every type of habitat that attracts birds is found in the The Blyde River Canyon Nature Reserve and all three South African species of Loerie can be found in the reserve.

We use cookies to ensure that we give you the best experience on our website. If you continue to use this site we will assume that you are happy with it.OkPrivacy policy